Going from LearnerMama‘s Blog Linky, “Ten things I’ve learned as a Mother”, I’ve decided to add my list of discoveries of the last eight weeks to the pile. Being a new Mammy has certainly been a journey of discovery, and while I’m fully aware this is only the beginning, I feel like its been a hell of an education so far. Eight weeks, ten things, here we go. 1. Sleep Deprivation is a form of torture, and a way of life, all at the same time. I could do college all over again, all nighters followed by gloriously long sleeps after exams, or 9am lectures when I’ve hit bed at 3.30/4am. Easy peasy. Old me didn’t realize that I’d have to cope on less than that, and be a fully functional human looking after another human at the same time. That said, I have started going to bed at 9pm when its not my turn to mind him – having a reserve of a few hours before it becomes my turn is all important – because he rarely sleeps when it is my turn.

2.When the baby is asleep on you, you have two options. Stay under them, perfectly still until they naturally wake, or the more realistic option, needing to eat/pee/get on with your day so adopting the approach of that guy from 127 Hours. You can live without an arm or a leg. Could you really live with waking the baby?

3. Breastfeeding is all natural, but not everyone is a natural at it. It can be a tough skill to learn in the sleep deprived hazy days of being a new mammy. I know we started out really well and it all fell apart four days in when he decided to stop eating completely. The addition of nipple shields proved a fix but we’re now in the tough stage of weaning him off them as they’re messy, finicky and don’t let you get all of the milk out. You have to have support and determination and nobody tells you that beforehand so it can present as quite a shock.

4. Getting out of the house is all important. I can generally be found rescuing my sanity by wandering around the same shops most days just to get away from the four walls of the house.

5. The sling is incredible. Before having baby, I would never have put myself down as a babywearing, breastfeeding attachment parent. Necessity has proven me wrong. My little man screams if you put him down and don’t pay him attention, so the sling has afforded me my arms while he’s feeling safe and secure. I definitely recommend them! 6. Mammy Guilt is very real. Leaving him for even a few minutes with someone else, for a well deserved break even when he is perfectly safe comes with a layer of guilt. Speaking in a harsh tone to him when I’m exhausted and he’s screaming. Not exclusively breastfeeding is a major one. This was not much aided by a healthcare professional who when telling me he wasn’t gaining enough weight and I’d have to feed him some formula, told me it wouldn’t do him “too much” harm. As if it were poison. Even when breastfeeding, if I’ve eaten something that hasn’t agreed with him, or had a caffeinated coffee, the all new mammy guilt kicks in. Pointless but true.

7. The fan in the bathroom contains his cries, or at least my paranoia has it that way. He will be asleep. I will run to get the worlds fastest shower, throw shampoo into my hair and bam, hes roaring. Hop out of the shower, shampoo still in half the hair, and he’s sleeping like an angel. Typical.

8. Clothes sizes for little babies vary ridiculous amounts. As the mammy of a “tiny baby”, , finding clothes that aren’t swimming on him has been a task and a half. He was 5 lb 8 when he was born. Very few lines do “Tiny Baby”, and even so, some of them have a very strange idea of what a tiny baby is. Generally the brands with MASSIVE newborn sizes (10lb) have their premature line of “Up to 7.5 lb”. The same size is newborn in some others. Mothercare and Pumpkin Patch are liable to this one. Generally Tesco has proven to be the best for sizes, if only they’d consistently stock the sizes and more than three little outfits.

9. Baby sick is the most disgusting feeling. The consistency and volume of it. He has one sip too many without being burped and up comes anything he’s eaten this week. Nasty nasty.

10. Despite all of this, all he has to do is look at me with those big brown eyes, smile in his sleep or grab my finger with his little hand and I melt to mush. I blame the sleep deprivation for how sappy I have become since I’ve become a new mammy

So thats that – follow the link below to the rest of the 10 things posts people have done! Comment if you’ve found anything similar or have anything to add. Any discoveries you made as a new Mammy or Daddy that were eye openers would be great to share! 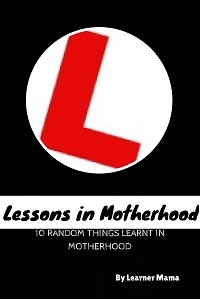 Since lots of time has gone by since writing this post, of course lots more has been learned. Here are some more life lessons that being a mother has taught me, and indeed things that my toddler has taught me.

BadMammy is on Facebook , documenting life from being a new mammy and beyond. Come say hi!