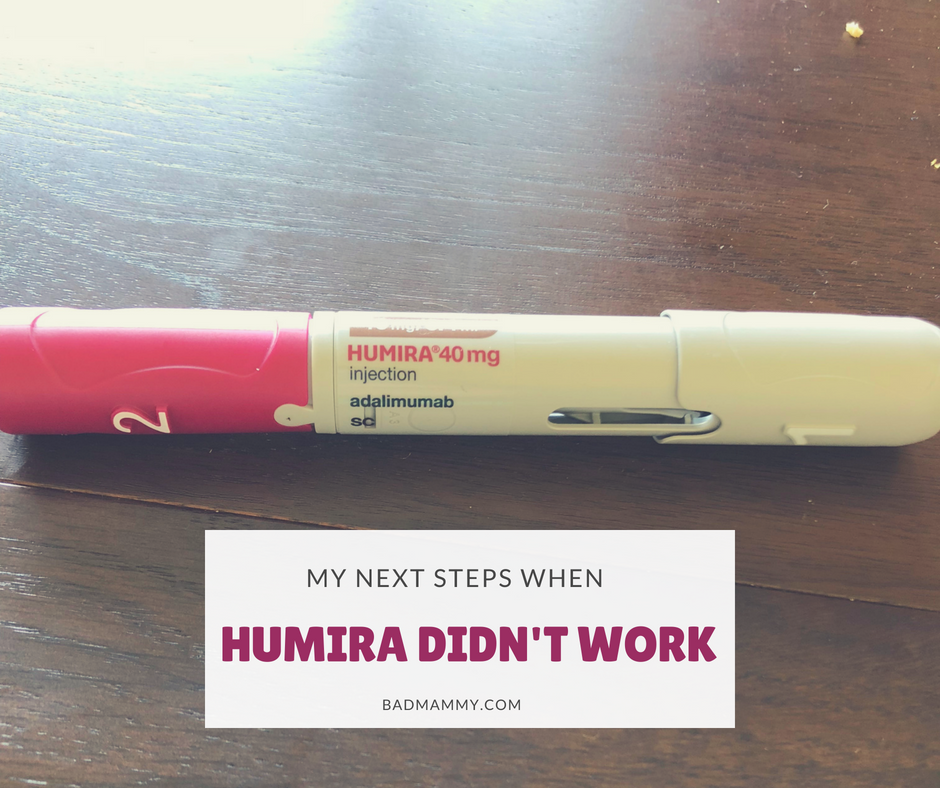 Obviously, before I start, I need to emphasise that I am not a doctor. I do not have any medical experience outside of my own. These are just MY opinions and experiences. For actual medical advice on taking Humira, definitely contact your doctor/medical professionals who deal with administering this drug!

Humira (otherwise known as adalimumab – try saying that three times in a row!) is an injectable drug used as an immunosuppressant. It can treat arthritis, plaque psoriasis, ankylosing spondylitis, Crohn’s disease, and ulcerative colitis. It’s known as a TNF (tumour necrosis factor – a substance made by your immune system) blocker. Generally, the human body and the immune system keeps the levels of this TNF stuff steady but in some cases, when it thinks it needs to fight an infection that isn’t there, it keeps producing it causing lots of other ill effects.

Since we were running on the concept of me having as-of-yet-unconfirmed spondyloarthritis (again with the big hard to pronounce words), my doctors have taken the “let’s throw stuff at it and see if it works” approach. It’s not a decision they’ve taken lightly – I’ve been on A LOT of medications and dealt with a tonne of side effects along with them. I was advised from the very start that there was a chance that it wouldn’t work. However, since I’ve tried so many options-  medicine, physical therapies and even surgical intervention, this was next on the list.

I was told that Humira would make me more susceptible to infection, as with any other immunosuppressant. Luckily, I started to take it in the Summer when there are fewer colds and cases of flu around. I haven’t come down with anything. It was something I was quite nervous of with a four-year-old in the house. As anyone who has kids in childcare can tell you, the kids tend to bring home EVERYTHING. This meant there was the chance of anything and everything going around. But I got lucky in that regard.

Reading the list of side effects (potential side effects) for Humira is a mission in and of itself. I’m told that it’s because it’s such a relatively new drug, that anything which comes up in a clinical trial as happening, even if not directly caused by the drug. Even knowing this, when you see that side effects like cancer and heart attacks are couched in between sweating and the common cold, it is a bit of a shock to the system. For someone led to the panic of Dr Google in the past, it definitely wasn’t a fun evening. However, aside from being told to be careful in the sun (during our heatwave, obviously) due to a much higher risk of developing melanoma, I was waving off the risks of it as “Sure, everything causes cancer these days”.

The dose of Humira which I was given was one 40mg injection pen dose every two weeks. Initially, the idea of injecting myself horrified me. I’ve looked on people with diabetes and other illnesses which require this with awe over the years. It’s not that I’m bad with needles (although I have dodgy veins), but I don’t think anyone really is a big fan of sticking needles into themselves. However, the first one was done in the presence of the very attentive nurse from Abbvie, the company who manufactures it and runs a quite good care service alongside it. She was able to answer any questions I had and gave me tips like picking the fattiest part of the body to do it in, taking it out of the fridge early etc. As a result, it barely hurt me, which was a relief. I had seen horror stories online of stinging and horrible pain. Over the four doses of the drug which I took, I only had one which wasn’t super-straightforward. I managed to hit a vein, I think, which meant it bled a little and required a plaster. It bruised for about 10 days after it, which is apparently quite common. Aside from that though, it was quite painless. However, I did discover that for a few days after each injection, I was experiencing serious mood changes. I’ve suffered from depression and depressive episodes over the last decade, and as a result, have been taking antidepressants for the last four years. However, generally these days I would have considered my mental health to be under control if a little low on high pain days. With the introduction of these injections, I seemed to become a lot snappier, quicker to rage, tearing up for no reason and my anxiety levels were soaring. The part of my mind which was normally able to rationalise things like a tantrumming preschooler or things not going the way they should have vanished. One day I found myself hiding under my bed, sobbing, unable to deal with a tantrum from our four-year-old. I felt my self-esteem fall off the face of the earth, along with my energy levels. It’s been a dark few weeks.

After this had happened a few times, I noticed the pattern of the mood swings and the injections. I wasn’t seeing any improvement from a pain point of view. If anything, I was in a huge pain flare and felt worse than I had in a long time. I made an appointment with my long-suffering GP. She advised me to contact the rheumatologist to talk about changing the medication immediately, as well as changing up my pain medication and monitoring my anxiety. She said that while it can take a while to kick in, it seems that Humira didn’t work for me. At the same time, she also advised to check in with my pain management consultant, who I’m due to have an appointment with soon. In the meantime, she prescribed some muscle relaxants and changed up my painkiller regimen a little to see if that made a difference. She has been there through every up and down of the last five years and is as frustrated as I am that we haven’t managed to kick this yet.

The muscle relaxants have had an effect on the anxiety levels, as expected. However, the painkillers haven’t changed things up much. As my physio put it last week, “your back isn’t a happy place right now”. (Nor are my hips nor my glutes, but let’s focus on one part at a time to not get overwhelmed).

What’s Next Since Humira Didn’t Work?

I managed to get an appointment with my rheumatologist fairly quickly when I explained the problem to his secretary. In our appointment, he announced that as Humira didn’t work and I was having side effects we would cease the use of Humira immediately and switch to something else. That something else is a drug called Cosentyx. This one isn’t a TNF Blocker, but “a human IgG1κ monoclonal antibody that binds to the protein interleukin-17A, and is marketed by Novartis for the treatment of psoriasis, ankylosing spondylitis, and psoriatic arthritis.” (Thank you Wikipedia). Having read up on it a little, it seems that it has fewer side effects. It tackles a completely different part of the immune system. The initial “loading period” will have me take one injection pen a week for a month. After that, it’s just one a month, instead of the twice-monthly injections I’ve become used to.

I’m hopeful because I have to be. I’m looking up dietary changes, I’m rocking my heat pads like they’re going out of style. And naps. Lots of naps, because my fatigue is still at an all-time high. Any time a return to work is mentioned, the doctor I’m speaking to looks at me like I’ve got three heads. Not only am I a frequent daytime napper, I’ve got brain fog which makes holding a full conversation quite difficult. That would make my day job of talking to people for a living rather difficult. I’m making my peace with it. It’s become easier this time, probably because I’m in SO much pain, to reconcile my not being in work and being at home, something I previously had so many issues with. Maybe it’s admitting defeat or maybe it’s personal growth, I’m not sure which. It’s just my reality for the minute and I’m going to get there in the end. I just have to keep telling myself that.

So that’s where we stand at the moment. I’m all set to begin a new medication and setting off on a new voyage to find THE CURE. Or at least a patch to hold me together for that little bit longer. It’s not too much to ask for, is it? I’d love to hear from others who have been in these shoes, especially with spondyloarthritis, if Humira didn’t work for you. Leave me a comment below, or give me a shout on social media (the links are below). I’d love to chat with you.